GREAT LOCATION IN THE HEART OF PRAGUE

The Best Location in the Heart of Prague

The Adria Hotel Is Situated in the Centre of Historical Prague

A mere 7 minute walk from Old Town Square, only 8 minutes from Charles Bridge and just a 10 minute ride on the Metro to Prague Castle. The Metro station and tram stops just outside the hotel and a quiet spacious garden behind the hotel. Shopping centres, boutiques, restaurants, bars and entertainment venues all around. Can you imagine a better place for your holiday? Located in the very centre of Prague, close to Powder Gate, the Municipal House is one of the most significant Art Nouveau buildings in Prague. Over the years the most eminent Czech artists participated in its decoration. It is a magnificent multi-purpose complex used for many occasions. Situated in the middle of the building, Smetana Hall is considered to be one of the largest concert halls in the city. The Municipal House is also a venue for balls and exhibitions. Besides other attractions that you can see here, there is an elegant French restaurant, an American bar and a restaurant in the Czech pub style. a 7 minute walk or 1 stop on the Metro

With its rare and beautiful buildings and churches, Old Town Square is the most important historical square in Prague and one of the most picturesque squares in all of Europe. Its history dates as far back as the twelfth century. Old Town Square originally served as a central marketplace for Prague. Over the centuries the houses were constructed here in Romanesque, Baroque and Gothic styles and stories of the rich merchants and political intrigue naturally accompanied them. The most noteworthy historical sites of this square are no doubt the huge Church of Our Lady before Týn, Old Town Hall Tower and the famous astronomical clock. The Jewish Quarter in Prague is located between Old Town Square and the River Vltava. Its history dates back to the thirteenth century, when the Jewish community in Prague was ordered to leave their homes and all settle in one place. Representing the best preserved complex of Jewish historical structures in the whole of Europe, it gained its present look primarily during the period of rebuilding from 1893 to 1913. The Jewish Quarter also includes the Jewish Museum, Old-New Synagogue and the old Jewish Cemetery, the most important site of its kind in Europe. an 8 minute walk or 1 stop on the Metro

Built in the fourteenth century, Charles Bridge joins the two sides of Prague. This magnificent structure is one of the greatest tourist attractions in the city, representing the main pedestrian route connecting Old Town with Lesser Town. The bridge is typically constantly overcrowded – with street painters, musicians and tourists. Over the years thirty statues and sculptural groups were installed on the bridge. Perhaps the most interesting, as well as the oldest, is the statue of John of Nepomuk. 2 stops on the Metro and a 10 minute walk

Prague Castle is the largest medieval castle complex in Europe and the ancient seat of Kings of Bohemia. Being considered the most important Czech historical site and one of the most significant cultural institutions, it consists of several palaces, an observation tower, museum, art gallery, monastery and finally the imposing St. Vitus Cathedral. Today Prague Castle is the seat of the President of the Czech Republic and serves as the historical and political centre not only of Prague, but the whole country. Taking place every hour and at noon with a ceremonial fanfare, the changing of the guard has always been very popular.

Tell us what you need and leave the rest to us.
See more 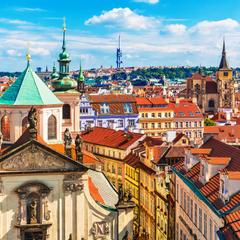 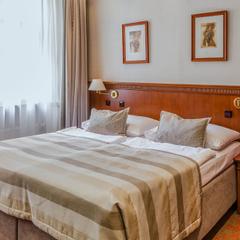 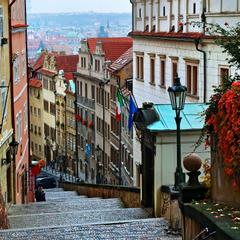